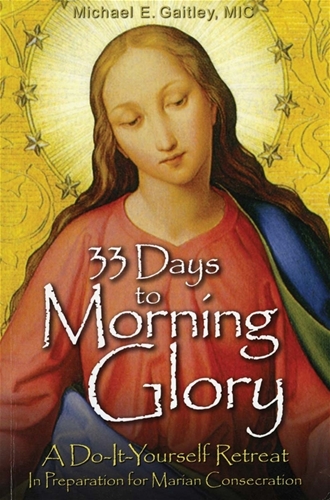 An extraordinary 33-day journey to Marian consecration with four giants of Marian spirituality: St. Louis de Montfort, St. Maximilian Kolbe, Blessed Mother Teresa of Calcutta, and Blessed Pope John Paul II. Fr. Gaitley masterfully summarizes their teaching, making it easy to grasp, and simple enough to put into practice. More specifically, he weaves their thoughts into a user-friendly, do-it-yourself retreat that will bless even the busiest of people. So, if you've been thinking about entrusting yourself to Mary for the first time or if you're simply looking to deepen and renew your devotion to her, 33 Days to Morning Glory is the right book to read and the perfect retreat to make.

Father Michael Gaitley, MIC, is a member of the Congregation of Marian Fathers of the Immaculate Conception. Prior to his ordination to the priesthood, he received a Masters Degree in Theology and a Licentiate Degree in Moral Theology.

After his ordination to the priesthood, Fr. Michael succeeded Fr. Seraphim Michalenko, MIC, as the director of the Association of Marian Helpers, a spiritual benefit society with more than 1,000,000 members. As director, he has launched a new pastoral initiative called Hearts Afire: Parish-based Programs for the New Evangelization (HAPP).

He is also the author of the best-selling Marian Press books, Consoling the Heart of Jesus, 33 Days to Morning Glory, The 'One Thing Is Three, You Did It To Me, and The Second Greatest Story Ever Told.

He frequently appears on EWTN and preaches retreats throughout the country on topics such as Divine Mercy, Consoling spirituality, and Marian Consecration.

When he is not preaching missions and retreats, Fr. Michael lives and works on Eden Hill in Stockbridge, Mass., home of the National Shrine of The Divine Mercy.

YOU DID IT TO ME

CONSOLING THE HEART OF JESUS

THE SECOND GREATEST STORY EVER TOLD