THE SECOND GREATEST STORY EVER TOLD 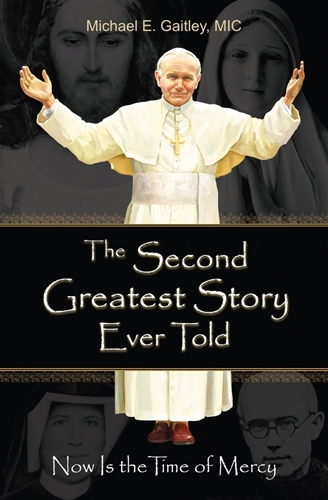 From the author of the bestselling book 33 Days to Morning Glory comes a gripping account of the prophetic witness of St. John Paul II, and the profound connection between Marian Consecration and Divine Mercy.

The Second Greatest Story Ever Told is more than a historical re-telling of the Great Mercy Pope. This book serves as an inspiration for all who desire to bear witness to the mercy of God, focused on Christ and formed by Mary. It calls us to respond to the urgent need for mercy in our time of unprecedented evil. Now is the time of mercy. Now is the time to make St. John Paul II's story your own.

Praise for the Second Greatest Story Ever Told:

"God’s mercy is the gift that’s so great it makes us wonder: Can it really be true? There must be a catch. Fr. Gaitley tells the story of Divine Mercy and Marian consecration in this popular history of the great devotional currents of the century just past.

This is not an academic exercise. This is a page-turner — and a life-turner — because so much turns on the question of God’s love for us, and the ways we love him in return. This book about Divine Mercy and Marian consecration in our time needs to become the backstory of my devotional life and yours."
- Dr. Scott Hahn, Author, Rome Sweet Home

About the Author: Father Michael Gaitley, MIC, is a member of the Congregation of Marian Fathers of the Immaculate Conception. Prior to his ordination to the priesthood, he received a Masters Degree in Theology and a Licentiate Degree in Moral Theology.

After his ordination to the priesthood, Fr. Michael succeeded Fr. Seraphim Michalenko, MIC, as the director of the Association of Marian Helpers, a spiritual benefit society with more than 1,000,000 members. As director, he has launched a new pastoral initiative called Hearts Afire: Parish-based Programs for the New Evangelization (HAPP).

He is also the author of the best-selling Marian Press books, Consoling the Heart of Jesus, 33 Days to Morning Glory, The 'One Thing Is Three, You Did It To Me, and The Second Greatest Story Ever Told.

He frequently appears on EWTN and preaches retreats throughout the country on topics such as Divine Mercy, Consoling spirituality, and Marian Consecration.

When he is not preaching missions and retreats, Fr. Michael lives and works on Eden Hill in Stockbridge, Mass., home of the National Shrine of The Divine Mercy.

YOU DID IT TO ME

COULD YOU NOT WATCH WITH ME ONE HOUR?