I WILL GIVE THEM A NEW HEART 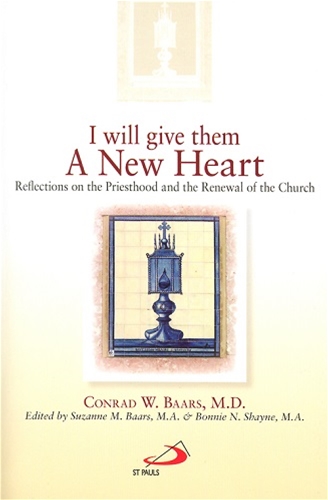 
Addressing the needs of the faithful necessitates addressing the needs of those who bring Christ to us in a special way – priests, religious and consecrated persons. In a time burdened with doubt, mistrust, and suspicion of the Church and those who server her, Dr. Baars presents profound insight to aid laypersons, priests and religious in order to help usher in a new springtime of life into the Church. “In seeking remedies for the trials and scandals that plague the Church in the world, the lesions contained in this book should be placed in the hands of every bishop and major religious superior. The analysis of the mental and emotional causes and effective remedies of these problems presented by Anna Terruwe and Conrad Baars have been praised by Pope Paul VI and John Paul II. In basing their scientific principle upon revelation, the teaching of the Church and the philosophies of St. Thomas Aquinas and St. Francis of Assis, they present lessons that obviously are founded upon a message presented by God through His beloved disciple John: that ‘that God so loved the world that He sent His only begotten Son’… and that this ‘God of Love’ is the Source of Affirmation and healing.” Rev. Gervase Cain, TOR

About the Author: Conrad W. Baars, MD PhD (1919-1981) was a native of the Netherlands but practiced psychiatry in the United State from 1946 until his death. Educated at Oxford University and the University of Amsterdam Medical School, Dr. Baars served in the anti-Nazi underground in Belgium, France, and Holland during World War II. Captured by the Nazis he spent two years in Buchenwald Concentration Camp. During the Korean War he served in the American Army as a medical officer. He discovered Dr. Anna A. Terruwe’s work on energy and frustration neuroses in the mid-1950s and developed and promoted it throughout his psychiatric career. His books include Born Only Once, Feeling & Healing Your Emotions, The Psychology of Obedience, The Unquiet Heart (Alba House, 1991), and his autobiography, Doctor of the Heart (Alba House, 1996). Dr. Baars and Dr. Terruwe co-authored Psychic Wholeness and Healing (Alba House, 1981).

Priestly Reflections: In a time where those who serve the Church are viewed by many in a poor light -- through doubt, mistrust and suspicion, I Will Give Them a New Heart: Reflections on the Priesthood and the Renewal of the Churchby psychiatrist Conrad W. Baars, MD offers profound insight to aid lay persons, priests and religious in order to help usher in a new springtime of life into the Church. Edited by Suzanne M. Baars, MA (the doctor's daughter) and Bonnie N. Shayne, MA, the sample essays are collected to discuss the mental and emotional causes of the trials and scandals of the Church of the recent past and includes an analysis and remedies of those problems. The scholarly book discusses how to treat and prevent the crisis in the priesthood, the affirming power of love, morality and the Christian Anthropology of Thomas Aquinas, forgiveness, anger and the alcoholic priest. --Crux of the News, May 12, 2008


Two stirring books that may sometimes seem to say one thing when saying another are Peter Kreeft's Jesus-Shockand the deceased Conrad W. Baars's I Will Give Them a New Heart. Regarding strong and vital truths, good words fail to be as clear as on minor facts or lesser values, so stay with them till the integral truth that is in them lifts you up or pushes you forward. Baars's New Heart brings faith and psychology to bear on renewal issues of the ordained priesthood, consecrated life, and the entire church. He makes trenchantly perceptive comments about certain trends in modern church theory and practice while offering convincing ideas and freshly practicable Christian behaviors. Buy and read this book and make it work for you. --Review for Religious, 67.4 2008

The author of this book died in 1981. He was a native of the Netherlands who spent two years in a Nazi concentration camp, survived and then immigrated to the USA. He became a psychiatrist who based his view of human nature on revelation, the teaching of the Church and the philosophy of St. Thomas Aquinas. Accordingly, he had serious disagreements with the dominant ideas of his profession as expressed by Freud and other leading psychiatrists
This volume is a collection of his articles and lectures that have some relation to the priesthood. The key idea in the book is the affirming power of love. In fact, the word "affirmation" appears on almost every page, often many times. According to Baars, in order to be a fully mature human being one needs to be "affirmed" by significant others, such as parents, siblings, friends, teachers and, for married people, by one's spouse.
Baars maintains that as many as one-fourth of all priests and religious have mental problems of one kind or another, some serious and some slight, because they are "unaffirmed" individuals.
At the end of the book there is a glossary of terms that offers the following definition of affirmation: "A three-part process of being present, moved by and revealing to another one's feelings of love or liking, which strengthen the other to be himself" (p. 251).
According to Baars, all emotions are God-given and therefore good; he has a whole chapter on the value of anger and why it should be expressed on some occasions, but always under the control of reason. Many priests, he claims, are unbalanced because they have been taught to repress their emotions for ascetical reasons. They have been taught not to offend others ever, to be "nice" guys, and so they keep their emotions to themselves, often being angry within but not showing it to others. This, he says, is not healthy mentally.
There are chapters on seminarians, priests and bishops, as well as on homosexual and alcoholic priests.
We find in the book an attempted wedding between some of the insights of psychology and the philosophy of St. Thomas Aquinas. Baars claims that St. Thomas agrees with him. I have some doubts about that; there are some important distinctions that should be made about the emotions, and our author does not make them. I attribute that to the fact that he is a psychologist and not a philosopher.
It seems to me that what Baars means by "affirmation" is the scholastic notion of the "love of benevolence"; that is, loving the other for his own sake and not for any utilitarian reason. His insight on this point is very important and useful in counseling others who have mental or personal problems.
Since this is a book about the priesthood, one criticism I would have is that the author does not adequately consider the role of grace in the life of a priest and the guidance of the Church. No one of us is perfect, but with the help of divine grace and the teaching of the Church we do make progress and have the tools to overcome personal deficiencies -- this applies both to the affirmed and the unaffirmed.
Dr. Baars is a thoughtful man and a man of great experience in dealing with mental problems. What he has to say is important. Those who counsel others will find many helpful hints in what Dr. Baars has to say. --Kenneth Baker, S.J. in the August/September 2008 issue of Homiletic & Pastoral Review 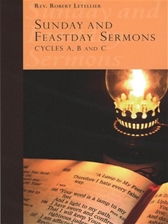 SUNDAY AND FEASTDAY SERMONS - Cycles A, B, and C 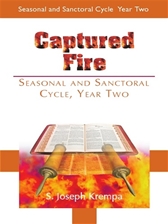 CAN I CONFESS BY E-MAIL? - (Only Available as an E-book)